info@educationtobacco.org
Education Against Tobacco / Uncategorized / The School of Medicine at Federal University of Ouro Preto (UFOP) implements EAT in Brazil 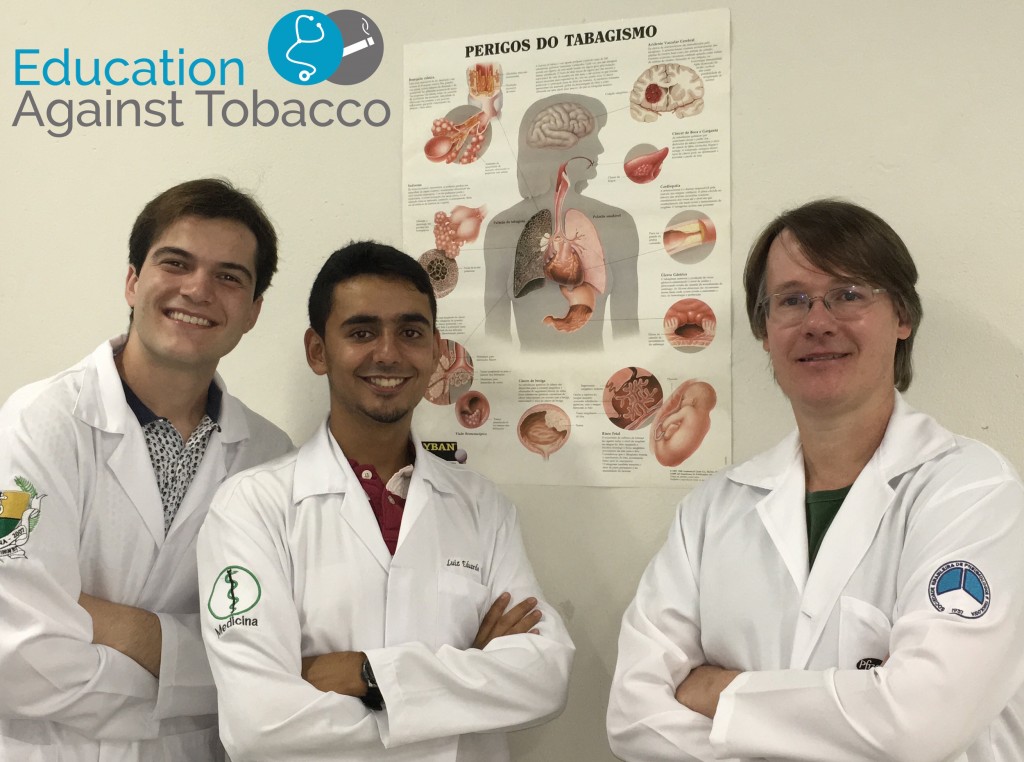 What motivated you to start the Project in Brazil?

Medical student Breno de Souza: “Brazil has always taken historic actions to improve tobacco control. Proudly, in 2001, we were one of the first countries to prohibit the use of misleading descriptors, as ‘light, smooth, low tar’ in any cigarette brand commercialized in our territory. In 2011, we gave a push in the momentum of fighting against tobacco by becoming the world’s largest smoke-free country – a Federal Law of that year required all enclosed public spaces to be smoke-free. Besides that, in 2012, Brazil also became the first country to outlaw flavored cigarettes, such as the menthol ones. Although important steps have been taken, which resulted in a meaningful reduction of smoking prevalence over the past two decades, around 17% of Brazilian population still smokes (approximately 25 million people). As medical students, it is our duty to help even more in the improvement of these numbers and the Education Against Tobacco is a valuable strategy for that because the Project addresses adolescence – a stage of life that has been overlooked by tobacco control policies in Brazil. Although there`s a public educational program targeting teenagers, its implementation is not widespread in the country.”

What are your plans for the Project in Brazil?

Luiz Xavier: “We are very excited about the EAT in Brazil. First of all, we are fortunate to have Prof. Paulo Corrêa as a faculty member of our Medical School. Prof. Corrêa is a Pulmonologist who has been granted a certificate of excellence in tobacco control by the Pan American Health Organization / World Health Organization (PAHO/WHO). He is continually providing us with orientation and helps us to adapt the EAT materials to the Brazilian cultural context. Second, we want to thank Titus J. Brinker for providing us with a full translation of his science-based curriculum to Portuguese which has been continuously evaluated and optimized over the past four years. This helps us a lot and is a sound basis for eventual adaptions. Also, this is what is special about EAT: it is no random campaign that just tries things out without a scientific background like many other campaigns. In this connection, we plan to discuss eventual adaptions with Titus for its scientific soundness and are looking forward to hold our first classroom seminar by July of 2016. Meanwhile, we plan to get support from Brazilian public and private institutions to help us to propagate the project throughout the nation in order to foster this initiative in other Medical Schools. So far, we got support from both the Department of Education that operates the public schools of our city and from the Extension Committee of our University.”

“Very few studies have collected information on medical-student-delivered school-based prevention strategies. These studies used different sampling methods, questionnaires, and data collection procedures, and very few are from low or middle-income countries. Beside the opportunity to address this gap of knowledge, it is really exciting to see young medical students engage in tobacco prevention efforts. I am thrilled to see Luiz and Breno starting the efforts to prevent the uptake of tobacco by teenagers and acquire a lot of skills in the process”, argued Prof. Dr. Paulo Corrêa.