info@educationtobacco.org
Education Against Tobacco / Uncategorized / More than 600 Brazilian adolescents per year either quit or not start smoking due to EAT, research says

More than 600 Brazilian adolescents per year either quit or not start smoking due to EAT, research says

The study was conducted between 2016 and 2018 among 2438 adolescents from grades 7-11 at public secondary schools in Brazil. These adolescents were divided in two groups: one group received the standardized EAT intervention and another group (control group) received no intervention. Both groups were simultaneously followed for one year.

From baseline to 12 months, the intervention group had a significant lower rate of smoking initiation and a significant higher rate of smoking cessation. The study concluded that for each 12 adolescents who are covered by the EAT intervention, 1 adolescent either quits smoking or does not start smoking compared to the control group (i.e., number needed to treat, NNT=12).

Oscar Lisboa, a medical student who was a director-member of the study, claims that “our findings have high local relevance. Considering the NNT that we found (NNT=12) and the current structure of EAT in Brazil (8000 adolescents covered annually), we can extrapolate that 667 Brazilian adolescents per year (8000/12) either quit smoking or do not start smoking due to our actions”.

Prof. Paulo Corrêa, a pulmonologist and study director-member, mentions that “the aim of our study was to see if EAT intervention with adolescents indeed changed their behaviour after one year, a long waited analysis since we founded EAT-Brazil”.  The research is the first one to show long-term effectiveness of a school-based educational intervention to reduce smoking among adolescents in Brazil.

Matheus Rocha, also a medical student and study director-member, is hopeful that the results will help to foster EAT even more across the Brazilian territory. He explains that previous studies in Brazil failed to show positive effects: “for example, a study from 2011 with 2200 adolescents had tested the educational intervention from the Brazilian Cancer Institute (INCA) and concluded that the INCA intervention does not reduce smoking among adolescents”.

In 2015, Dr. Breno Bernardes-Souza got to know EAT while he was a visiting medical student at BWH Hospital – Harvard Medical School. When he returned to his home university, Federal University of Ouro Preto, he joined forces with his colleague Luiz Xavier and Professor of Pulmonology Paulo Corrêa to found EAT-Brazil.

The initial plan was to promote tobacco control among adolescents from Ouro Preto by using the EAT curriculum for school-based tobacco prevention. “Our goal was to recruit and train motivated medical students, who would then educate adolescents in their local school setting – the plan was restricted to our university city”, medical student Luiz Xavier explains.

However, now, three years after EAT-Brazil was founded, EAT is already established at 15 Brazilian medical schools, with more than 200 medical students volunteering to educate more than 8000 Brazilian adolescents per year. “This expansion occurred spontaneously. By social media and by person-to-person contact, students and Professors from other medical schools got to know EAT and started reaching out to us asking for instructions on how to found EAT in their institutions”, says Dr. Rayanna Pereira, a physician who joined EAT-Brazil while she was still a medical student and fostered its expansion also across the oceans – Dr. Pereira promoted the implementation of EAT in Portugal and is now promoting its implementation in other Portuguese-speaking countries.

Besides that, the enthusiastic EAT-Brazil team has helped with the Portuguese translation of the two EAT apps, Smokerface and Smokerstop, which are free (for Android and iOS) and encourage smoking cessation among Brazilians on a daily basis. The team has also organized a writing contest called “EAT-Brazil Tobacco Control Award” to recognize the best ideas for enhancing smoking control in Brazil.

Dr. Breno, who brought to Brazil the EAT ideal and was also director-member of the reported study, concludes this interview saying that “smoking is the largest preventable cause of mortality in Brazil. By preventing smoking in adolescence, EAT-Brazil prevents deaths and improves quality of life. We are very thankful to all volunteer medical students that helped with the completion of this study and to those who make the EAT-Brazil project possible on a daily basis”. 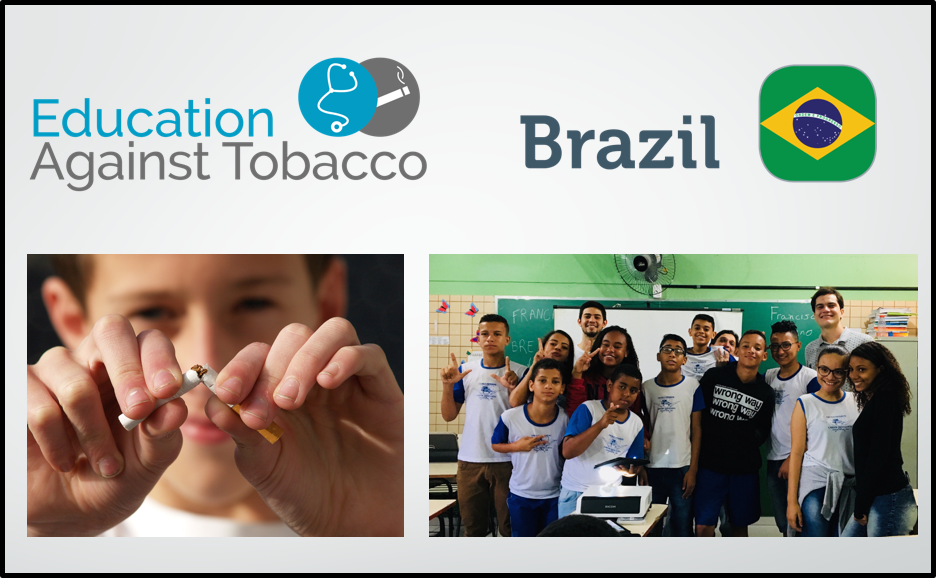