Last week, Titus J. Brinker received a national award for his efforts in tobacco prevention and cessation. Chancellor Angela Merkel invited him to Berlin to hand over the 5.000 Euro award in honor of his commitment. “This is a great honor for everyone involved in our network who made this team effort possible.”, said Brinker in a public statement. Ailis Haney, the head of an EAT group at the medical school in Heidelberg was invited by Titus to join him. 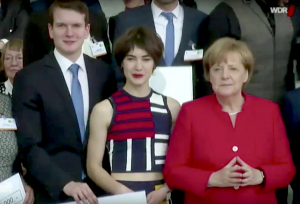